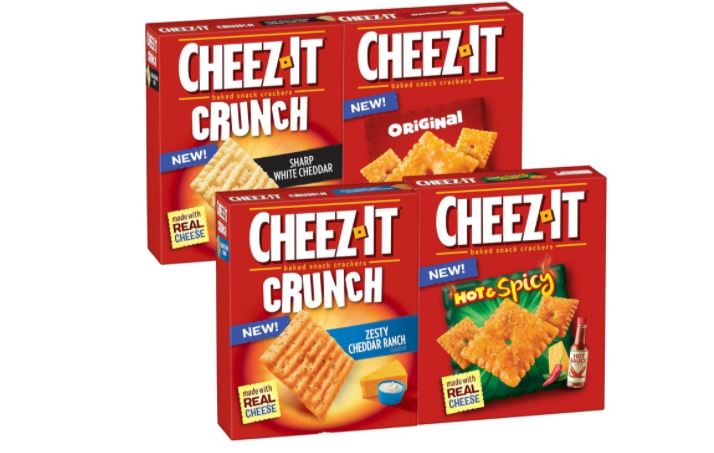 One thing dog owners will tell you about their dogs, they will eat just about anything. Dog owners will give their dogs treats, but do dogs eat junk food? We will answer that question in this article to illuminate what dogs can eat and what is right for them to eat.

Dogs don’t have the same ability to digest processed foods as humans do, and this can be a problem for a dog owner when a dog regurgitates food that they eat they can’t process. Today, we’re going to focus specifically on whether dogs can eat Cheez-Its.

Can my dog eat Cheez-Its?

While throwing your dog a Cheez-its from time to time won’t necessarily hurt them, there are health repercussions for the dog. The composition of Cheez-Its has no nutritional value for Fido, and the salt, dairy, and fat that make up Cheez-Its contain no vitamins for a dog.

Cheez-Its crackers are considered junk food, and eating too many Cheez-Its will undoubtedly mess with a dogs’ diet. Absorbing too much sodium can lead to salt poisoning as dogs get enough salt in their kibble daily that they don’t need extra salt introduced to their diets.

Fat and dairy are an essential part of any diet, and for a dog, it is relatively the same. However, dogs don’t typically get much milk in their natural diets, so they’re not accustomed to it. The snack we know as Cheez-Its is a milk-based treat, and too much dairy leads to problems for canines.

An inflamed pancreas, itchy skin, diarrhea, and vomiting are symptoms of overindulgence. When you give a dog a 15-cracker serving of Cheez-Its, it contains eight grams of fat, and that is too much for a dog.

When we review Cheez-Its for caloric value and nutritional value, we see that Cheez-Its aren’t the best snack dogs can consume. A standard Cheez-Its pouch contains 42 grams of the product. The total calories number of calories in a bag of Cheez-Its is over 200.

When we break down the composition of Cheez-Its, we can see that they contain more nutrients than you would expect them to.

Cheez-Its a breakdown – serving/percentage of the value.

The scale that is used is based on 2000 calories for consumption per day, and the daily value equates to an individual serving of Cheez-Its.

Can Dogs Eat Cheez-Its? What Types of Cheez-Its Can They Eat?

In a word, yes. Like anything, though, a dog can eat Cheez-Its in moderation, but dogs will eat anything in excess, and that is where the problems begin. Let’s examine the downside for your dog when they eat Cheez-Its.

The problem with Cheez-Its and doggy snacks is that Cheez-Its have carbohydrates and sodium in excess of the required amount for dogs to consume. An active ingredient in Cheez-Its is refined flour, and that is a poor substitute for whole grains and a lot less healthy when you compare it to refined flour.

The caloric intake of Cheez-Its snack far and away outweigh the recommended daily caloric intake for dogs. Dogs don’t need a high-calorie diet, and when they eat Cheez-Its – seven calories per cracker that are high in sodium content is terrible for a dog’s health.

Dogs, like humans, can suffer adverse effects when consuming too many fatty foods, and the problems that arise include obesity, diabetes, heart disease, high blood, and respiratory trouble.

Salt levels that are off the charts

A dog needs a little sodium, but it creates problems for them when they intake too much sodium. Ingesting more sodium than necessary will result in vomiting and diarrhea.

If the dog has overdosed on sodium, salt poisoning will be the direct result of a treat gone wrong. Dogs get all the sodium they need from kibble that they are fed, and that should suffice for any dog.

Dairy products are harmful to dogs.

Dogs aren’t an animal that needs dairy in their diets. Cheez-Its’ primary ingredient is milk, and that isn’t a natural food in any dog’s diet. Cheez-Its have heavy doses of milk and cheese in each tiny square, and that will lead to consequences that are detrimental for a dog.

Allergic reactions, and itchy fur coats, and upsetting your dog’s digestive tract are the downside of too many treats for Fido.

Cheese and the health of your dog

Over time, your dog will suffer from overeating cheese. The pancreas is a delicate organ and must be treated with respect. If your dog eats too much cheese, the long-term implications can have far-reaching effects on your dog.

An inflamed pancreas is a painful condition for any dog, and if Rover is afflicted with pancreatic problems, it could require surgery to correct the problem.

Artificial flavors that make up the taste of Cheez-Its are bad for dogs. In Chili Cheese Cheez-Its, chili powder is added to enhance the flavor. Bur dogs shouldn’t be eating this product for many reasons. It causes problems in the digestive tract that could prove fatal if too much of the product is consumed.

A toxicity problem occurs, and the results can be stomach pain, diarrhea, and bloat from gas buildup. Other issues include thirst and vomiting because your dog is trying to purge the harmful artificial flavor they have been fed.

Another variety of Cheez-Its contains onion powder, and that has implications for a dog’s health that are problematic. Onions contain an N-Propyl sulfide, and it is a very toxic and harmful chemical for dogs. When a dog consumes onions, the side effects are many.

They will drool uncontrollably, have stomach pain, they will vomit for no apparent reason, and have a bad case of diarrhea.

When garlic is introduced to a dog’s diet, it will have poor health outcomes. Like onions, the symptoms are similar, making a dog uncomfortable if they overeat garlic, and they could suffer fatal consequences.

The active ingredient in garlic is thiosulfate, and it is toxic for dogs. Anemia is a big problem for dogs when they consume garlic; thiosulfate causes severe damage to a dog’s red blood cells, resulting in hemolytic anemia.

Milk or lactose that is used to make Cheez-Its is problematic for a dog’s health. Dogs are allergic to milk and lactose products and will suffer significant discomfort when they ingest milk or lactose.

When a dog drinks milk, they will suffer intestinal problems related to milk composition, which will create other problems like diarrhea and vomiting.

Salt is another additive in Cheez-Its, and it another chemical compound that should not be introduced to a dog’s diet. Salt will make your dog incredibly thirsty, and it means frequent urination.

Also, salt in large servings will cause many health problems for a dog. Your dog will suffer from sodium ion poisoning and, at its worst, will lead to the untimely demise of your pet. When you see that dog is suffering from symptoms like diarrhea, vomiting, tremors, depression, elevated body temperature, and seizures, you know that your dog is feeling the effects of salt ingestion.

Vegetable oil is another agent used in making Cheez-Its, and it has far-reaching implications for your dog when it is ingested. Your dog will suffer from an upset stomach, and it will lead to diabetes because the damage to your dog’s pancreas will be permanent.

Vomiting and diarrhea are common symptoms for a dog to experience after eating cooking oil or products made with cooking oil like Cheez-Its.

FAQS about Cheez-Its and dogs

A: In a word, no, they shouldn’t. But in moderation, a small helping on rare occasions won’t do tremendous harm to your dog.

A: Like the first question, in moderation, but it isn’t recommended. Due to the nature of the composition of Cheez-Its, it has high concentrations of salt, dairy and calories, which is bad for dogs when eaten in excess.

Dogs can have treats, no question about it, but you must balance the treats. Too much of anything isn’t right for you or a dog.

Feeding your dog the empty calories that Cheez-Its represent is not only bad for your pet, but it will also create a situation where the health problems incurred may cause your pet health complications.