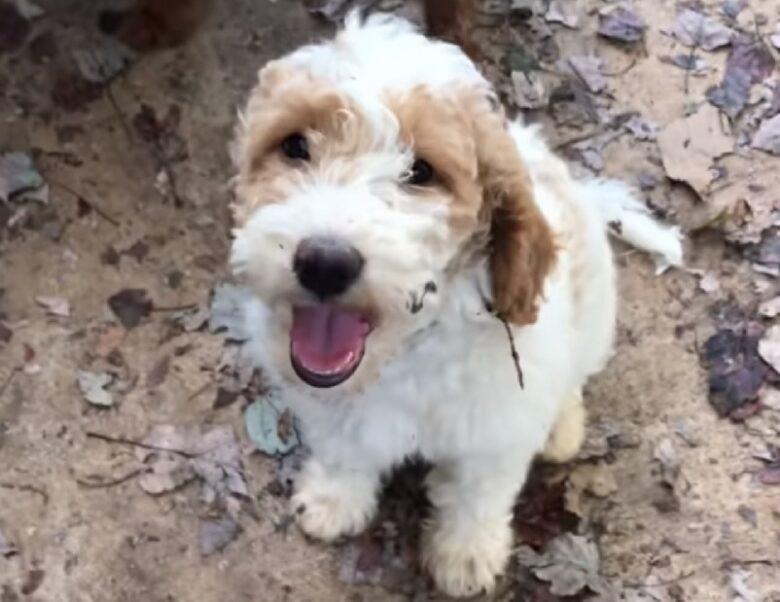 Throughout our history, we have bred so many different types of dogs for different tasks and even just for appearance or companionship.

By crossbreeding these types of dogs, we can create many new breeds, and some of them have grown followings that can nearly match the popularity of the breeds they started with.

We’ll particularly focus on the coat, as that is what makes a Goldendoodle a Parti.

What is a Goldendoodle?

Before we focus on the parti goldendoodle, we’ll take a look at what a goldendoodle is in the first place. As you may have guessed from the name, a goldendoodle is a dog breed that is created through a mix of a poodle and a golden retriever, and they look exactly like what you’d expect a mix of these breeds to resemble.

Goldendoodles come in many different coat types thanks to the countless colors that their parent breeds come in. Along with the actual colors that they can come in, goldendoodles can also feature various patterns, and parti is one of them, along with other shades like merle, phantom, and brindle.

If a goldendoodle has white markings that cover less than 50% of its coat, there are other terms that are used to refer to them. Parti goldendoodles can have a coat that mainly consists of white with even small patches of the secondary color, so there is no upper limit to the amount of white they can have in their coats.

The term parti comes from the word partial, as the dog’s coat is only partially covered in white, with the rest being made up of the secondary color. Ideally, the secondary color should have clear lines that don’t fade into the white but are rather clearly defined.

Parti goldendoodles are joined by other goldendoodle coat types that may not have the same kind of coverage. As we mentioned earlier, for a goldendoodle to have a parti coat, it must be at least 50% white, but if it isn’t it can be classified as a mismark. Other coat types include merle, phantom, and brindle goldendoodles.

Merle goldendoodles have a less clearly defined coat, and they consist of dogs that have a gene that randomly diminishes one of the colors. This results in patches of fur that are a muted version of the dog’s main color, though this genetic abnormality can have other serious consequences.

If a merle goldendoodle isn’t bred properly, then it may be at risk of blindness or deafness. This is because the merle gene can potentially cause other issues, and this recessive trait will come out if two parents with a dominant merle gene are bred together. This is why genetic testing is crucial when properly breeding merle goldendoodles.

Phantom goldendoodles have a very specific marking pattern, which consists of small markings behind the eyes and in other “hidden” locations, hence the name. Phantoms also have markings on the sides of their snouts, on their chests, on the lower side of the tail, and on the inner sides of the legs.

Mismark goldendoodles are the alternative to partis, and they may also be known as chrome or abstract goldendoodles. This happens when a goldendoodle has a coat that is less than 50% white and accompanied by another color. The delineations between the splotches of color also tend to be more gradual in mismarks.

Since parti goldendoodles are descended from golden retrievers and poodles, they have many different fur types that they can end up with. These include the type of curly coat you’d expect to see on a poodle, a wavy coat, and a straight-furred coat that is reminiscent of a human’s hair.

Curly goldendoodles tend to share a lot of characteristics with their poodle parent, and these dogs tend to require a lot of grooming to keep their fur in the best possible shape. Curly-coated goldendoodles are prized for their resemblance to poodles, and they typically sell for more.

Parti Goldendoodles with a wavy coat show aspects of both parent breeds, and they tend to have fur that’s a little easier to manage than those with curly coats. However, these dogs will still require quite a bit of fur maintenance to ensure that they stay looking as good as possible.

Parti goldendoodles also vary when it comes to shedding because of a recent discovery in the field of canine genetics. This was the discovery of the shedding genes, which are identified as MC5R and RSP02, though they are also dependent on the genes that result in goldendoodle furnishings.

After these tests are performed, the testers can combine these results to determine a shedding index ranging from zero to four. In this index, a score of zero means that a dog is very unlikely to shed while a score of four means that a dog will shed a lot more than the average parti goldendoodle.

Furnishings are the poodle-like characteristics that shine through in a parti goldendoodle, and a dog may have all of the furnishings or none of them. If a dog looks more like a golden retriever than a poodle, then it likely has no furnishings, and this is referred to as either open-faced or incorrect coat.

The most common furnishings include the distinctive mustache that you’d expect to see on a poodle mix, extending to the sides off of the snout and dropping downward. Since the genes responsible for furnishings are dominant, it’s possible to ensure that they pop up by breeding two dogs with dominant genes.

As we mentioned earlier, parti goldendoodle furnishings are responsible for determining how likely an animal is to shed. If a parti goldendoodle has more prevalent furnishings, then it will be much less likely to shed because of the lower chances of a poodle shedding relative to a golden retriever.

We’ve already noted the importance of the right parti goldendoodle breeder when discussing the implications of the merle gene, but there are other reasons why breeders need the right training.

For example, the FGF5 gene is responsible for determining the length of a dog’s fur. Through genetic testing, a breeder can determine whether or not a dog’s coat will be short or long because the short coat gene is dominant. If at least one of the dogs that a parti goldendoodle is bred from has the short coat gene, the coat will end up being short.

The curliness of a goldendoodle’s coat is also dependent on genetics, and breeders can prioritize whether a coat ends up curly, wavy, or straight. Interestingly enough, when you breed two parti goldendoodles with wavy coats, you can end up with any of the three coat types.