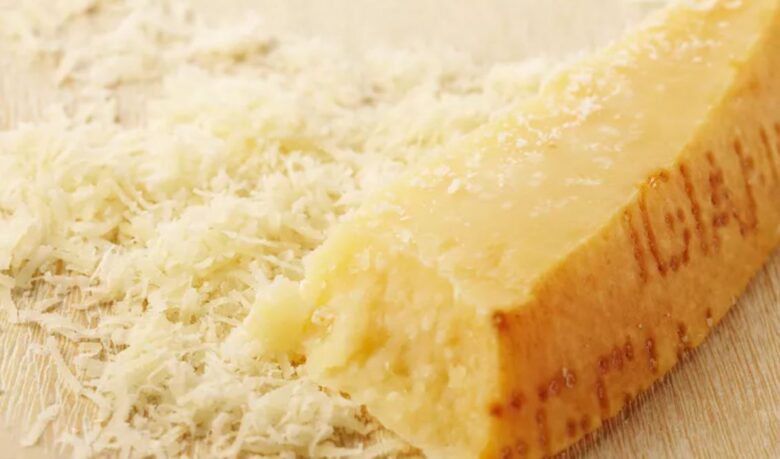 You may have fed your dog cheese before, and they seemed fine. Other people’s dogs can react to eating cheese due to them being lactose intolerant.

But, if you know they’ve had dairy products already with no reactions – is Parmesan cheese going to be any different?

Well, the simple answer is that cheese is non-toxic to dogs, so don’t worry if they’ve already eaten some. Yet, cheeses do have different characteristics, and parmesan is a very salty variety. And clearly, lots of salt is no good for dogs.

So a better question is…

How Much Parmesan Cheese Can Dogs Eat?

In short, we advise that very little parmesan should be fed to your dog because of its high salt content. When dogs eat a lot of salt, they become incredibly thirsty. But more seriously, they could get sodium ion poisoning.

The symptoms of a dog overeating salt can include:

And just so you know, dogs can die from sodium ion poisoning. So it’s vital to consult a vet if you think your dog has had too much salt or if they are showing some of the symptoms above throughout a 24 hour period.

We’re honestly not trying to scare you – it’s just good to know about such things – don’t you think?

It’s also worth noting other cheeses that have a higher than average salt content.

Other salty cheeses include:

Anyhow, it’s most likely that when you do feed your dog parmesan or other salty cheeses, it will be part of some leftovers you’d like to give them. In small amounts, this should be fine.

Keep in mind, however…

When you do feed them leftovers, there might be other ingredients within the meal that are toxic to your dog. Therefore, in the next section, we’d like to give you a little list of some foods that you should avoid feeding your dog – with or without Parmesan cheese added to their makeup.

There are recipes out there for parmesan corn on the cob – and it can be delicious for humans. However, corn on the cob or sweet corn is not suitable for dogs, so don’t think about giving to them as leftovers. It can cause a blockage in their digestive system and can even be fatal.

Many types of leftovers with parmesan might have onions cooked in as a base ingredient. Unfortunately, onions are particularly toxic to dogs causing stomach irritation and damage to red blood cells. Additionally, garlic and chives can cause similar issues and so should also be avoided.

Other non-parmesan related foods that are toxic to dogs include…

These are highly toxic to dogs that can cause liver damage and kidney failure. Most people aren’t going to think about feeding them to their pooch. Yet, think about how many cakes, cookies, and cereal products have them mixed into their recipe.

More specifically, we’re talking about Xylitol. This is added to many food products instead of sugar because it doesn’t have the same calories. It’s generally fine for humans but not for dogs because it can cause hypoglycemia. And hypoglycemia is associated with liver failure and blood clotting.

Theobromine found in chocolate is poisonous to dogs. There are very high content levels in dark chocolate. It causes kidney failure at worst in dogs.

Most types of nuts should be avoided in your dog’s diet. One type of nut that especially isn’t good is the Macadamia. It contains a toxin that plays havoc with a canine’s nervous system.

We could go on, as there are many other toxic foods for dogs out there. Therefore, if in doubt, a strong tip is to make sure you do your research before introducing any new foods or leftovers into their diet.

Since it’s made from milk, it makes sense that there’s calcium in cheese, which is good for your dog’s bones. It also contains B-complex vitamins, Vitamin A, and fatty acids that are all good for dogs and humans alike.

Even more surprising, though…

Research has suggested that cheese can be beneficial for your dog’s teeth. It is thought to reduce harmful acids in the mouth, creating plaque that’s damaging to teeth.

It can also help dogs that suffer from osteoporosis because of its source of relevant vitamins and minerals.

How to Know If Your Dog Is Lactose Intolerant?

As mentioned earlier, you shouldn’t give cheese to lactose-intolerant dogs. But how do you know if they are or not if they’ve never eaten dairy before?

You should know that many dogs are lactose intolerant to some degree.

One of the first clear signs that cheese doesn’t sit well with your dog is if they show symptoms of a stomach upset. Obviously, you’d have to be comfortable giving them a little bit of cheese first.

In general, there are five things you should look out for to determine whether your dog is lactose intolerant:

When dogs pass wind, we all know about it – it can be quite the potent smell! If they are letting off-gas more often than not, they’ll be having problems with their gut. It could indicate lactose intolerance if they’ve eaten any dairy type products recently, such as Parmesan cheese.

If your dog’s gut looks larger than usual and doesn’t look too happy about it, it could indicate lactose intolerance.

Anyone seeing their dog not wanting to eat would be concerned. There are multiple reasons why they refuse to eat or lose their appetite, but lactose intolerance is one of them.

When a dog’s digestive system doesn’t handle dairy well, it will make their stomach rumble, ache and it can even make them sick up what they’ve eaten.

If your dog’s stomach wants to push food out one end because of lactose intolerance issues, then it most certainly will come out the other end.

A good tip is to monitor your dog’s stool as it is a good indicator of its digestive system’s health.

You read right – can dogs have a cheese addiction? Well, research using the Yale Food Addiction Scale has found out that casein found in cheese, and all dairy products, can trigger the brain’s opioid receptors. And these receptors are thought to influence addiction.

We all know someone who has a bit of a cheese addiction – you might even have one yourself? The same could apply to dogs. If they eat cheese regularly, it makes sense that they might become addicted to the stuff.

So, you might think twice about treating them parmesan infused leftovers or little cubes of cheddar.

But what if your dog absolutely loves cheese and you don’t want to deprive them of it?

The Best Cheese Alternative For Dogs!

You’re in luck if you’re searching for a tasty cheese alternative for dogs.

It’s called nutritional yeast, and although it doesn’t sound too appetizing – dogs figging love the stuff! And even better, nutritional yeast has no salt in it whatsoever. As well, it’s commonly referred to as “nooch.”

But what is nutritional yeast?

It’s been around for a while now as a cheese alternative for vegans. They put it on their pizzas and mac and cheese to give them a similar experience to eating cheese with these types of foods.

It’s made from beet molasses and sugar, and it’s an inactive type of yeast. Breads have similar yeasts in them, but nooch doesn’t have leavening properties that cause an expansion in pastries and doughs.

Besides, nooch is considered tasty because of its umami-like qualities and its super healthy!

Therefore, if you want to avoid giving cheese to your dog, why not let your pooch chomp on as much nooch as they like? You could use it as a training treat or simply sprinkle some into their food for extra vitamins.

So dogs can eat parmesan, although go easy on the amounts because of the salt content. They can also eat other cheeses as it isn’t toxic for them. Just watch out for any signs of lactose intolerance in your fluffy friend.

Also, if you are feeding them leftovers from your favorite parmesan dish, make sure to check that all the other ingredients are non-toxic to your dog.

Lastly, nutritional yeast, or nooch as it has been termed, is a healthy cheese alternative for dogs that they can eat regularly. You won’t risk finding out whether they have lactose intolerance issues, and they’ll love it!

Thanks for stopping by!