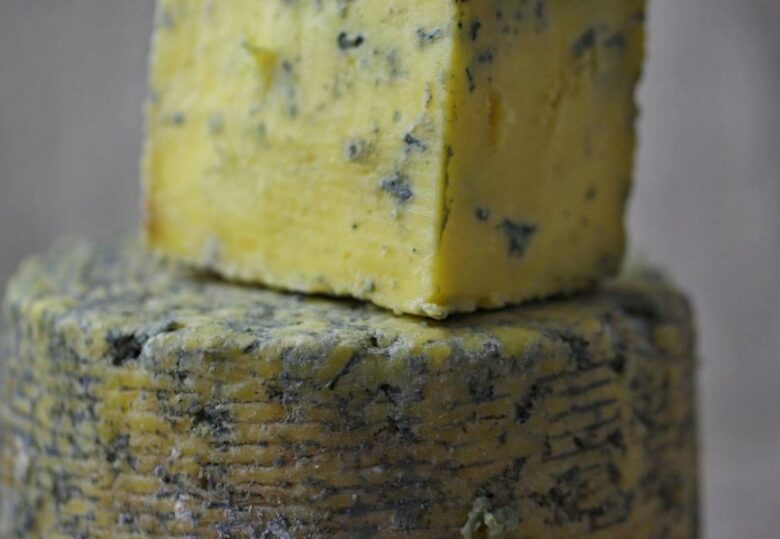 Blue cheese is the pinnacle of the cheese world. Ripened with actual mold cultures, its intricate taste will make you a fan once you get used to it.

Blue cheese is one of those flavors that you have to allow to grow on you before you appreciate it. In that sense, it is like Campari or raw fish; you will probably hate it before you love it.

Can My Dog Eat Blue Cheese?

So, you have passed the first phase of your blue cheese journey. You now enjoy it, and you always keep some in the fridge to accompany a glass of red wine.

However, your dog has picked up on its distinct smell and has set eyes on it. You might be wondering if it is OK for your dog to try. After all, dogs usually love cheese, and blue cheese is, well, cheese.

Unfortunately, the answer is no. The fungus involved in making blue cheese will produce a substance that dogs are often sensitive to. Your pet can soon start experiencing symptoms such as vomiting and diarrhea. Some animals can even develop a fever and have seizures.

It is not the same for all dogs. The chances your dog can tolerate blue cheese well are slim. If you are lucky, your pup will show no interest in it. Even if she does, stay on the safe side and refrain from giving your dog blue cheese as a treat.

Blue cheese was probably invented by accident. The story goes cheese was stored together with grain products in some moisture- and temperature-controlled caves during the Middle Ages and mold from the grains moved on to the cheese.

Blue cheese is a generic name, which covers several different varieties of cheese. The common theme is that they are all ripened with cultures of a specific type of mold, named penicillium. And in case you are wondering- yes, it is the same fungus that gave us the world’s first antibiotic!

How is blue cheese made?

Any type of milk will do, goat, cow, sheep, you name it. After introducing a starter culture in the milk, cheese is created through the normal process. There is no difference from other cheeses in this stage. What happens now is what makes all the difference.

Penicillium fungus is sprayed on the cheese, and with the addition of (a lot of) salt to prevent spoilage, the cheese is left to age for two to three months. The result is an aged cheese with blue veins running across it ( a consequence of a process called ”needling”), a distinct taste and pungent aroma.

Maybe because blue cheese is by chance connected to penicillin, extraordinary health benefits have been attributed to it over the ages. We will not go so far! However, one British study found a correlation between consumption of blue cheese and the French Paradox.

In case you have never heard of it, the French Paradox is that Mediterranean people live a long healthy life even though they consume relatively high amounts of saturated fat. Red wine has also been proposed as a cause of the paradox. Red wine and blue cheese? Perhaps living the good life is to blame for the longevity of people in the south of Europe!

Since any exceptional health benefits are yet to be proved, the fact is that for now, blue cheese is as healthy as any cheese. It has a relatively high protein and fat content and is low in carbs. Like all dairy products, it is a potent source of calcium, phosphorus, and vitamin B12.

A potential downside of blue cheese is the sodium content. Because of the amount of salt used in the production process, blue cheese scores relatively high in sodium.

One oz (28g) of blue cheese has about 20% of the recommended daily sodium intake. Quite unfortunate, given its great taste. Dogs do not tolerate excess sodium well, so that is another reason to avoid giving blue cheese to your pet.

Is Blue Cheese Bad for Dogs?

Roquefortine poisoning often occurs in dogs who live in the wild and scavenge for food near human habitats. Occasionally they might come across some that has been thrown away and eat it. If the food has gone too moldy, the animals will suffer food poisoning, with potentially fatal consequences. The most common symptoms of roquefortine poisoning are:

You should call your vet immediately since your dog could require immediate medical care.

The prognosis for cases of roquefortine poisoning depends on how soon it is removed from the stomach. Early vomiting is very welcome in these cases. Death is likely to be prevented, and if the animal is cared for soon enough, a full recovery can occur in 24-48 hours.

Food poisoning is not the only issue with blue cheese.

Large amounts of blue cheese can be toxic. This does not, however, mean that small amounts are OK. It is unlikely that your dog will experience any symptoms by eating a few bites of blue cheese by accident. Like all other cheese, blue cheese is high in fat.

High fat treats should be consumed in moderation by dogs, and not every day. This is especially true of dogs who are overweight.

Easy on the sodium, it can hurt your dog.

Blue cheese is full of sodium. That is unfortunate for us, and even more so for our dogs. Dogs need much less sodium than we do. So, blue cheese is not the best food to serve as a treat. Especially if your dog has any kidney issues since the added sodium in the diet could be a disaster for your pup. It would be best to opt for other sorts of cheese or even plain yogurt in this case.

Types of Blue Cheese and Their Effects on Dogs

Nowadays, you can find many types of blue cheese, even in a simple grocery store, from French ones like Roquefort to Italian like Gorgonzola. There are even new styles of British and American blue cheese, like Stilton and Maytag blue. We probably like blue cheese so much that we took matters into our own hands!

Sadly for our pets, all types of blue cheese are made with the same fungus, so roquefortine is present. Therefore, none of them are suitable for a dog. They are also similar in fat and sodium content. All common types are pretty much the same in those aspects, and we should not give any to our pets.

If you want your dog to try, go with softer versions.

Soft French cheese, like Brie and Camembert, is not technically blue cheese. However, it is also sprayed with a type of similar mold (conveniently called Penicillium camemberti) and aged for a short time. It can serve as a substitute for blue cheese for your dog if you really want your canine friend to experience something like it. Practice moderation, however, because your dog will not!

FAQs About Blue Cheese and Dogs

Why is blue cheese bad for dogs?

Blue cheese is toxic for dogs because of Roquefortine C. This substance comes from the fungus used in blue cheese production. It is also high in fat and sodium. Excess fat or sodium can hurt a dog.

What will happen if my dog eats blue cheese?

It depends on the amount the animal ingests. In small amounts, it is unlikely your dog will experience any issues. In large quantities, however, the situation can escalate to an emergent medical issue. In any case, it is context related. It is better to call your vet immediately for advice on how to proceed.

In theory, yes. However, it is unlikely unless a dog eats a whole wheel of cheese for some reason.

Again, it is best to seek professional advice. Call your vet and explain what happened.

The one thing to keep from this article is that, unfortunately, your dog should not have a taste of that delicious Roquefort you keep in the fridge. Blue cheese offers no exceptional nutritional benefit for a dog.

On the contrary, they pose a sometimes serious health risk. It is better to avoid giving even a small bite to your dog. From personal experience, we know how difficult it will be to keep your pup away from the good stuff after trying it!