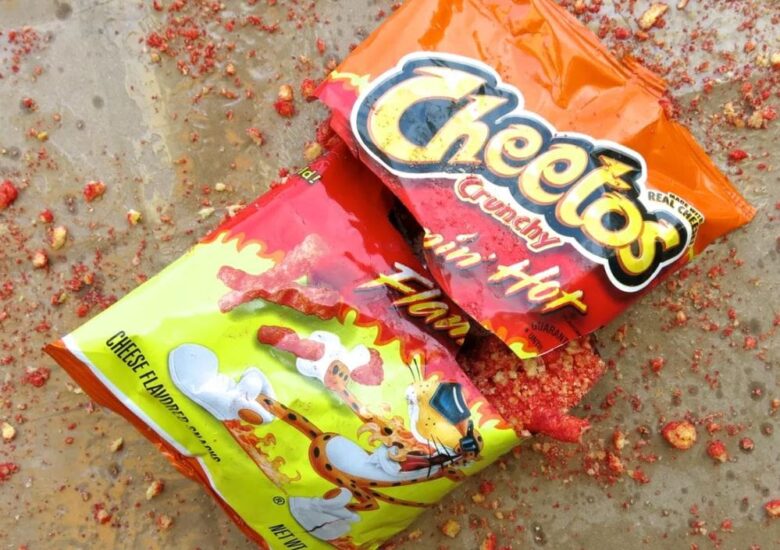 While it may have always been an unwritten rule between you and your dog that you’ll stick to the Cheetos while they’ll stick to kibble, you may find yourself wondering if they can have some Hot Cheetos as well. In this article, we’ll talk about everything you need to know about your favorite pup sharing your favorite snack.

Can My Dog Eat Hot Cheetos?

Short answer, no, you certainly shouldn’t make it a habit to share them with your dog. Not only do they have no nutritional value for your pup, but they also contain ingredients that could negatively affect them, such as onions and garlic.

Not to mention the fact that Hot Cheetos are of course—well—hot! Spicy foods, in general, are a big no-no for your canine companion; they can cause vomiting and diarrhea, along with burns on the stomach, throat, and mouth in more serious cases.

However, if you drop a Cheeto on the floor and your dog happens to eat it before you can pick it up, don’t worry—such a small amount isn’t likely to have any effect on them.

As you can probably guess, Cheetos aren’t very nutritional food. This goes for both dogs and humans, although the repercussions will be much more drastic for them than for us.

Our digestive system can digest and process things that a dog can’t, so when it comes to food,  maybe it’s time to reconsider the ‘what’s mine is theirs’ way of thinking. Dogs are primarily

carnivores, although mixing certain vegetables and grains into their diet can be healthy for them as well.

Hot Cheetos, however, hardly fall into any of those categories. Processed and then deep-fried cornmeal is the base of the crunchy snack, which is then dusted in the salty and spicy flavoring we’ve come to know and love.

There isn’t too much going on in the nutrition-department for Cheetos, but we’ll break down the components, so you don’t have to just take my word for it. All measurements will be based on the recommended serving size on the Cheetos website, which is only 21 pieces.

• 250 milligrams, which is 11% of the recommended daily value

• High levels of sodium could lead to dehydration in dogs

• 15 grams, which is 5% of the recommended daily value

• Excess saturated fats could lead to your dog developing pancreatitis

Beyond that, there isn’t too much else to a Hot Cheeto. They do contain a small amount of fiber,  although it’s less than a gram, so it doesn’t count for too much. They’re primarily just salty and fatty carbs, which is undeniably the perfect comfort food for us humans, although for dogs—not so much.

Are Hot Cheetos Bad for Dogs?

Given that dogs need a diet rich in proteins, healthy fats, and minerals, it’s safe to say that  Cheetos aren’t the place to look when choosing what to feed your dog. They’re what you would call empty calories, as they’re incredibly low in any form of nutrition while being quite high in calories.

This means that your pup would rack up a large number of calories while getting nothing in return that’s actually good for their body. Not only that, but spices such as powdered onion and garlic are present in the snack, which aren’t good for dogs either.

On top of all that, they most likely contain capsaicin, which comes from chili peppers. While they aren’t listed in the ingredients, it is safe to assume that the ‘natural flavors’ ingredient probably contains some form of spicy pepper.

Capsaicin is quite bad for dogs and will give them a terribly upset stomach. They probably won’t enjoy the spicy taste as much as they think they will either and will do just fine with a treat that is meant for them.

The saturated fats in snacks like Cheetos will be very hard for your dog to digest, and over time could lead to health problems. The same goes for high levels of sodium—a dog’s body will have a hard time processing it all.

The health risks from them regularly snacking on things like chips or cheese puffs just isn’t worth it in the long run, so do your best to not give in to their puppy-dog eyes.

What Happens if Dogs Consume Onions and Garlic?

• Onions contain a principal known as N-propyl disulfide, which is toxic to dogs as it causes a  breakdown of red blood cells, leading to anemia

• Garlic contains the same compounds as onions, making them bad for dogs for the same reason

• Similar to humans, dogs can experience spiciness in the mouth and throat and most likely won’t enjoy it

• Capsaicin, which is responsible for the spicy feeling, can lead to a variety of different  symptoms for dogs, the first being drooling or foaming at the mouth

• While capsaicin won’t kill a dog, it will cause intense stomach discomfort and possibly diarrhea and vomiting

It’s pretty safe to say that your dog will get nothing good out of consuming the ingredients that make up a Hot Cheeto. Between the salt, spices, and unhealthy fats, there almost isn’t a single positive thing that a Cheeto will do to your dog’s body. While one or two isn’t likely to cause them any harm, it’s still best to seek better options when deciding what snack to feed them.

Types of Cheetos and Their Effects on Dogs

Most Cheetos are created pretty equally, at least in terms of ingredients. You should avoid feeding your dog any kind of Cheeto, but if you’re going to, stick to the non-spicy options. While they won’t be any good for your pup’s body either, they at least won’t contain capsaicin; therefore, they won’t have as many negative effects on them.

Original Cheetos contain almost all the same things as spicy ones, so there’s not much of a point in comparing which is better for dogs. Instead, it’d make more sense to look at, which is the least harmful, which would be the original. This is due to the lack of capsaicin, although it definitely doesn’t mean the original Cheeto should be your pet’s new snack, either.

FAQ’s About Hot Cheetos and Dogs

A: The amount of Hot Cheetos that your dog is ever likely to consume in one sitting is  very unlikely to kill them

Q: What happens if a dog eats Hot Cheetos?

A: In small quantities, just an upset stomach. In large ones, vomiting and diarrhea  Q: What should I do if my dog consumes Hot Cheetos?

A: If it’s just a few, there isn’t much to worry about; your dog will most likely show very few side effects. If they eat a lot, watch for signs of dehydration or anemia, and be sure   to contact your vet

Q: How can I tell if my dog got into some Hot Cheetos?

A: In minor cases, your dog may just have diarrhea, although if you think they ate a large   quantity, you’ll want to keep a close eye on them for signs of lethargy or dizziness

Q: Can I give my dog a Hot Cheeto?

A: One or two Hot Cheetos isn’t going to harm your dog, although it’s still best to avoid   making them a regular snack

Overall, it’s pretty clear that there aren’t a whole lot of good ingredients in a Hot Cheeto. Dogs are built differently than us and can’t digest certain foods the same way, so it’s important to remember that your favorite snacks may not also be your dog’s.

Some components of Hot Cheetos have very negative effects on dogs, and even though they would have to eat quite a few to feel them, it’s still best to stick to feeding them treats that are actually made for them.

If you accidentally drop a few Cheetos on the floor and your dog gets to them before you can, don’t panic; a small amount won’t cause them harm.

The size of your dog will help determine how the  Hot Cheetos will affect them, but for the most part, your pup will be just fine after snatching a  few.

If you’re thinking of sharing your next bag of Hot Cheetos with your furry friend, maybe consider giving them some of their own treats and keeping your cheesy snack to yourself. While your dog may seem upset by this, their tummy will certainly thank you.