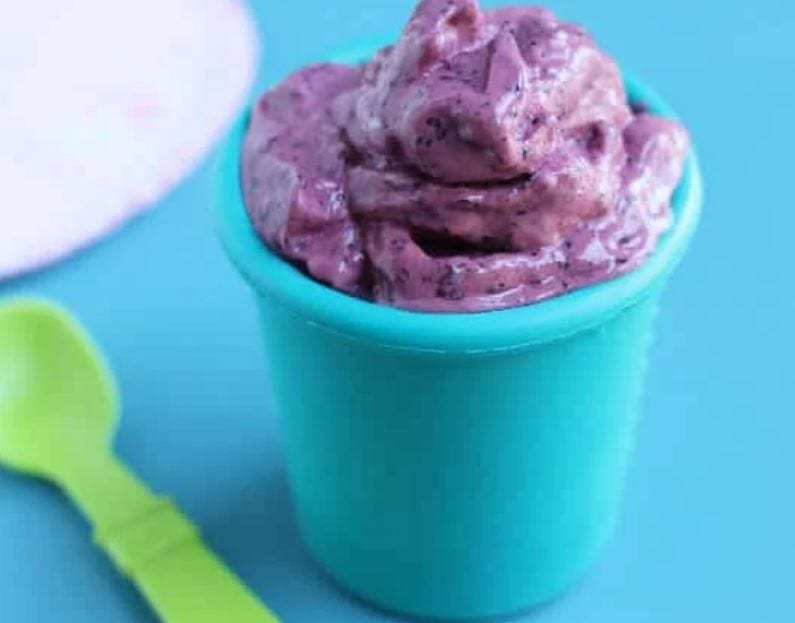 Feeding yummy little treats to your dog is all part of developing a healthy relationship with them.

We all know the endearing look our dogs can give us when they see us enjoying a snack. And, how hard it is to deny them a little bite or two of what we’re eating.

But can frozen yogurt be included in your dog’s diet?

When the summer months are stifling with heat, frozen yogurt seems like the perfect cooling snack. Plus, yogurt is not toxic to dogs – and some forms are incredibly healthy for them.

Yet, frozen yogurts typically won’t be so healthy for your canine friend because many store-bought versions are loaded with sugar. That being said, some healthier versions nowadays are perfectly fine.

And then, of course, there’s the option of making your own frozen yogurt very easily.

So let’s start with…

Again, ice cream is not toxic to dogs – so they can eat it. However, it is also rammed to the brim with sugar. Keep in mind, though, some ice cream flavors can be toxic to dogs, like chocolate, for example.

What’s so bad about sugar?

Just like humans, when dogs eat lots of sugar, they can get overweight, have teeth problems, and on the extreme side, develop diabetes. Not to mention, they can become manic in their behavior.

Many commercially bought frozen yogurts add extra sugar to compensate for the lack of creaminess in their flavor. But the sugar issue with frozen yogurts is only really with certain store-bought varieties – not all of them.

We should also add, there is a lot of lactose in ice cream. And many dogs have varying levels of lactose intolerance issues – which we’ll discuss in more depth later.

Another major difference between frozen yogurt and ice cream is that yogurt is fermented. The fermentation process takes away a lot of the lactose that dogs can have problems with.

Then you have to think that ice cream is made with milk fat or cream, whereas yogurt is just made from ordinary milk. So ice cream typically has much higher fat levels and more worryingly saturated fat content than frozen yogurt.

As well, with high sugar and fat content combined, ice cream tends to be more calorific.

So when you look at the arguments for and against the two foods, it’s easy to see why frozen yogurt is a preferred choice over ice cream for dogs.

Now that’s established, it would be good to know…

Which Frozen Yogurt is Best For Dogs?

Making your own frozen yogurt is the safest and most reliable way of providing this tasty treat to your dog.

You can control the sugar levels – if you choose to have any, that is. And, as long as they’re not lactose intolerant, it can become a regular part of their diet.

What’s more, you’ll be able to enjoy this healthy snack alongside them, maybe as a way of cooling down in the summer heat.

A Frozen Yogurt Recipe For Dogs?

Simply buy some plain yogurt with no added sugar and freeze it. It’s that simple! Plain Greek yogurt is an ideal choice because of its velvety and creamy texture.

If they don’t like the plain yogurt you’re serving them, why not add a touch of honey instead of sugar to serve their sweet tooth? A little honey is OK for dogs – be aware that puppies or dogs with immune system problems should stay clear of it.

Are there no store-bought alternatives?

These days there is plenty of low fat and low sugar frozen yogurts out there. They’re almost exclusively marketed for human consumption, but man’s best friend could enjoy them too.

And, it’s worth remembering that yogurts do have live active cultures in them. These cultures aid digestion and promote good gut bacteria growth.

Now you might be thinking – what if my dog is lactose intolerant? Like ice cream, yogurt is made from dairy, and that’s what causes the lactose issues.

For those that already know their dog is lactose intolerant, you might want to skip this section.

It is always a good idea for the rest of us to establish whether your dog is lactose intolerant. Here we’ll tell you what to notice in your dog to find out if they have lactose problems.

First, you’ll have to feed them a small portion of a dairy product. Ideally, it wants to be low in salt, sugar, and fat. That’s why we think giving them plain frozen yogurt is the best thing to feed them when testing for lactose intolerance.

And please don’t worry – lactose intolerance symptoms in dogs can be uncomfortable for them but not fatal.

So once they’ve eaten some yogurt, within the next 24 hours, look out for these symptoms:

If you do notice one or more of these symptoms, it could indicate lactose intolerance. And when this is the case, avoid giving your dog dairy products. Instead, try frozen yogurt or ice cream alternatives, which are available specifically for dogs now.

Furthermore, recipes out there deliver the same textures as frozen yogurt and ice cream, but without the dairy.

One cool idea is to…

Blend up some bananas and then freeze them. Bananas are not toxic to dogs, plus they have minerals and vitamins that can help to fortify their diet.

Before we finish up, we believe it’s useful for owners to have some idea of which foods can be dangerous and toxic to their dogs. It’s common to serve up frozen yogurts with extras on top, such as fruits and nuts.

So here’s a quick little checklist of toppings that you should avoid feeding your dog alongside frozen yogurt (or ice cream):

Whether it’s inside the sugar-free frozen yogurt or within your chosen toppings, this artificial sweetener is not suitable for dogs. It’s in some kinds of peanut butter, for example, and it can make dogs go into a state of hypoglycemia. Hypoglycemia is connected to blood clotting and liver failure.

Grapes and raisins are causes of severe liver damage in dogs. You might not add them as a topping, but some store-bought varieties of frozen yogurt and ice cream could have them added to their recipe.

OK, so not all nuts are toxic to dogs. Macadamia nuts are the ones to watch out for, as they can cause issues with your dog’s nervous system and muscle functions. Other nuts like cashews and peanuts are OK in small quantities, but they are high in fat. Plus, too much salt from salted peanuts isn’t good.

Some people love to eat sweetcorn with ice cream, especially in a few Asian countries. The problem is that sweetcorn is known to cause blockages in a dog’s digestive system. Blockages can have dire consequences in dogs to the point of no return.

What Food Can You Give Your Dog?

We want to end on a positive note and tell you some choices of toppings that your dog can eat with frozen yogurt or ice cream.

These canine-friendly toppings include:

Adding some shredded or cut up apples as a little sweetener for your sugarless frozen yogurt is a cool idea. Not only will it satisfy your dog if they have a sweet tooth, but it will provide them with vitamins C, and A. Apples are also a good source of fiber.

A word of warning, though – don’t let your dog have rotten apples because they can actually get alcohol poisoning from them!

Yes, we warned you about nuts, but a small spoonful of unsalted peanut butter on your dog’s frozen yogurt should help their little treat go down much more smoothly and to their liking.

And although high in fat, unsalted peanut butter does have its benefits. It has vitamins B and E, niacin, plus it’s a good source of protein. Do, however, check for the toxic ingredient Xylitol before you decide to give them a spoonful.

Adding some thinly sliced bananas as a plain frozen yogurt topping for your dogs can also add an element of sweetness. They’re cheap, easy to get hold of and have nutritional benefits for your pet pooch.

We’ve gone through many thoughts and considerations about dogs eating frozen yogurt, and ice cream. We’ll say it again – you can feed your dog frozen yogurt. Try to avoid giving your dog ice cream, though.

Besides, making your own frozen yogurt couldn’t be easier. Just buy some plain yogurt and freeze the stuff. Before freezing your yogurt, consider adding a touch of honey for your dog’s sweet tooth? And lastly, choose your toppings wisely if you’re thinking about serving their yogurt with extras.

Many thanks for stopping by and checking out our advice. All the best!