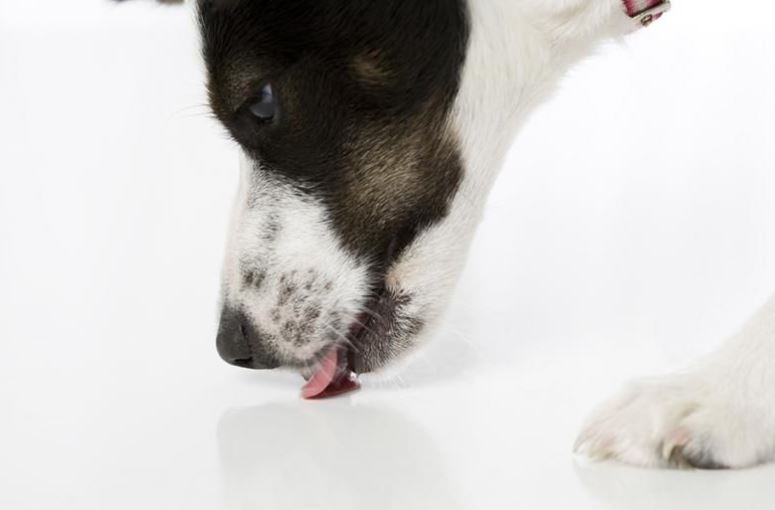 Dogs have a lot of similarities with younger children, including a relative lack of communication skills and a habit of getting themselves into trouble in the most incomprehensible ways. Another similarity between human children and dogs is a penchant for licking things and putting objects in their mouths.

Instead of broadly focusing on dogs and their habit of licking things, we’re going to explore why dogs lick the floor today. We’ll take a look at some of the root causes, which include basic urges and deeper issues, and we’ll also discuss how you can dissuade your dog from licking the floor in the first place.

Reasons Why Dogs Lick the Floor

There are many causes for dogs licking the floor, and some of them are relatively harmless while others may be serious physical or mental conditions. Before you try to stop your dog from licking the floor, you need to know the reason why your pet is doing so to pick the right strategy to get it to stop.

One of the most obvious reasons why a dog may lick the floor is because it’s intrigued by the taste. Much like toddlers may be interested in the strange flavors that they perceive when they lick random objects, dogs may get that same rush of joy from licking a particular patch of the floor.

This can be caused by a wide range of things, including the material that the floor is made out of, in which case you’ll have a hard time masking that flavor. However, it may also be due to the things that you use to clean the floor, especially if you use white vinegar to clean and disinfect the house.

Even if your dog isn’t trying to lick a part of its body and its directly licking the floor, it may have associated the action of licking with relief from its allergies, so it’s always a smart idea to get your pet tested. There are many environmental factors that can result in canine allergies, and many of them are similar to the causes of human allergies.

Your pet may be experiencing an allergic reaction because of dust in the air, dander from other pets, and even pollen due to the changing seasons. These particles tend to get trapped in a dog’s fur and will eventually result in an allergic reaction when they reach the underlying skin.

Yet another cause of excessive licking in dogs is nausea, and this is often when they’ll specifically lick the floor. Dogs don’t have the same way of showing that they’re nauseous as we do, so they engage in some odd behavior when they’re experiencing an upset stomach, including licking floors and walls.

Most of the time, the floor-licking should subside along with the nausea, so it typically isn’t a huge concern unless it continues for more than 24 hours. There’s no reason to get worried until after this point, as a dog may simply have eaten something that disagrees with its system and that will pass.

Some of the other signs of a dog experiencing nausea include licking its lips far more frequently than otherwise and drooling a lot more than usual. If these symptoms don’t subside after a day, we’d recommend taking your pet to the vet to determine if there is a serious issue that requires treatment.

Nausea isn’t the only thing that can cause a dog to start suddenly licking the floor, as there are many other digestive issues that have nausea as a symptom. If your dog has been licking the floor far more often than usual, it may be suffering from ELS (Excessive Licking of Surfaces).

Studies have linked ELS to gastrointestinal issues in most dogs that exhibit symptoms of the condition. There are many reasons why your pet’s digestive system may be irritated, though it is commonly caused by food that doesn’t agree with it. One of the best ways to determine if the issue is caused by a type of food is by using an elimination diet.

If the issue isn’t being caused by food, then a dog may also be suffering from an issue that can be treated with antibiotics or other medication. After being treated for digestive conditions, most dogs will stop exhibiting symptoms of ELS within a short timeframe.

If none of the above conditions seem like a cause of your dog’s excessive floor licking, then it may be caused by a neurological condition like OCD. While doggy OCD may sound like a joke, studies have shown that canines are just as liable to suffer from OCD as human beings are.

Since pets with OCD experience a compulsion for stimulation, they’ll try and stimulate themselves in any way possible. In many cases, this manifests in the excessive licking of various surfaces, including walls, furniture, tables, and the floor.

Don’t forget some of the main causes of behavioral issues in dogs: the twin forces of stress and boredom. If a dog is stressed, it may exhibit that stress in many different ways, including licking the floor compulsively, as it will give your pet a distraction from the stress that has been weighing on it.

Along with stress, many pets experience boredom just as surely as we do. While it may seem like dogs can be amused by simple things for hours on end, their patience only extends so far, and they may end up feeling bored without an effective way of letting you know that they’re bored.

Even anxiety can cause dogs to lick the floor excessively, and it’s often difficult to deal with these situations because pets can’t tell you the source of their negative emotions. Try changing up your routine and testing different methods to help your pet deal with issues that are causing this sudden shift in behavior.

Make Sure That the Floor is Always Clean

If you notice that your dog has suddenly taken to licking the floor, one of the first things you should do is to ensure that the floor they’re licking is clean. Make sure not to use potentially toxic cleaners that can end up hurting your dog if they’re licked up shortly after use.

One of the best ways to clean your floors with a dog that’s licking them excessively is by using white vinegar. White vinegar is an effective disinfectant because of the acetic acid in it, but since it can be consumed by living creatures without fear of poisoning, it’s the perfect choice for homes with dogs that are licking floors.

Try to Dissuade the Behavior Firmly

As with any other kind of behavior that you want to prevent in a dog, you’ll have to be firm but not aggressive when you’re punishing your dog for licking the floor. Keep in mind that this technique will only work if your dog is actually suffering from a behavioral problem.

Only use this approach if you’re sure that the floor licking isn’t being caused by something that your dog can’t control, like stress, anxiety, or a medical condition. If your dog is being compelled to lick the floor because of these aforementioned problems, punishing your pet may end up stressing it further.

Bring Your Dog to the Vet for a Professional Opinion

As always, one of the best ways to figure out how to help your dog when it’s licking the floor excessively is by taking it to the vet. Getting the opinion of a trained professional will make it easier to determine the underlying cause and to formulate a plan to stop it from there.

If the issue is being caused by an intestinal condition, then your vet will be able to prescribe medicine to treat it. Your vet may also be able to determine if there is no obvious reason and you can start using the process of elimination to determine if your pet’s floor licking is caused by stress, anxiety, or other factors.