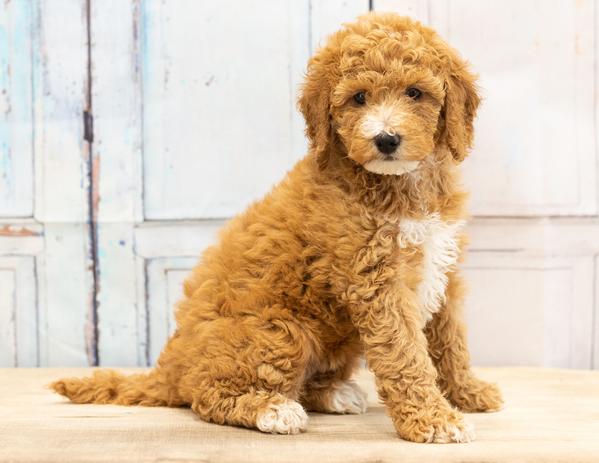 The Goldendoodle is definitely a must-have dog especially for people who are fans of luxurious dog crossbreeds. This breed is actually considered a designer breed, where there is a cross between a Golden Retriever and a Poodle. With their luxurious locks, royal demeanor, and overall versatility, it will be really hard to pass up the chance of getting one.

The Moyen Goldendoodle is what you call a Goldendoodle that is between the size of a miniature and a standard size Goldendoodle. Usually, they are 15-20 inches in height. Also, their weight can range from 40-50 pounds.

As you may have noticed, the Moyen Goldendoodle is the ideal size for a Goldendoodle as it will not be too fragile compared to one that is smaller in size, but at the same time, it is not too big to really intimidate you. Keep on reading to learn more about this majestic breed!

What is a Goldendoodle?

The Goldendoodle is still considered a young crossbreed compared to other crossbreeds like the Labradoodle (a cross between a Labrador and Poodle) or the Pomskie (cross between a Pomeranian and Husky) But the demand for them is growing as they have proven to be a good companion and even service dogs.

It was first bred in the 1990s when there was a surge of Labradoodles and Cockapoos. The aim of the breeders was to produce a bigger Doodle that is low maintenance at the same time. Meaning, there should be less shedding and dander.

At the same time, they wanted to breed a dog that also has a friendly demeanor, very intelligent, and highly trainable. All of the said characteristics are the default ones that are owned by the Golden Retriever. Thus, breeders thought of combining Golden Retrievers and Poodles to create a new “Doodle.”

As said earlier, they are still considered a new designer breed. Therefore, Goldendoodle pups are still a product of first-generation breeding. This also means that it is a bit rare to breed a pair of Goldendoodles.

Keep in mind that even though it is such a popular breed, it still does not have any breed registry or club. However, there are Goldendoodle communities that share the love and ownership of the breed. In fact, the love for this breed is so strong that many believe that it will be the most popular Doodle.

What is a Moyen (medium) Goldendoodle?

You can categorize the Goldendoodle based on their sizes. In general, there are three sizes which are:

Our focus which is the Moyen Goldendoodle is what you can call “just the right size” because its height is somewhere between 15 to 20 inches and it weighs about 40 to 50 pounds.

The Small Standard Goldendoodle or often called the Moyen Goldendoodle got its name from the French word “Moyen” which literally means medium. This term is also used in France to refer to Poodles that are intermediate in size. As for the rest of Europe, they simply refer to those sizes as Kleins.

Characteristics of the Moyen Goldendoodle

We might have probably tickled your fancy into getting a Moyen Goldendoodle. So let us tell you more about this fantastic breed.

Is the Moyen Goldendoodle for You?

We might have already sold you into getting your very own Moyen Goldendoodle as we have already elaborated on their traits. At first glance, you might see that there are advantages as compared to disadvantages. But the truth is, you really cannot base your decision on general characteristics.

In order for you to know if a certain breed of dog will fit you, you should know how they can affect the dynamics of your daily life. Will you have less time for yourself? Will caring for them stress you out? Can you provide the Moyen Goldendoodle a quality life?

Here are a few things that you should consider.

Moyen Goldendoodles can be expensive. This is expected as it is really the right amount of trial and error in breeding to get that medium size. More than that, you have to keep in mind that you also need to buy him food and toys. The extra expense is also put into medical expenses for routine check-ups related to genetic illnesses.

When it comes to grooming, you do not have to put in a lot of effort as they do not need a lot of grooming. They are considered as a non to light shedders so they only need a good brushing once or twice a week.

They are also not picky eaters, so you can pretty much just leave their required food and they will eat it up with no problem.

A thing that you should set aside time for is their daily exercise. It is a non-negotiable fact that they should get exercise every day. It does not have to be an hour-long exercise, it can be a 30 to 40-minute exercise.

The only other thing that requires more effort on your part is the observance of any genetic problems. You have to be aware of the signs to look out for when they are displaying the genetic weaknesses of having a crossbred dog.

Moyen Goldendoodles have a lifespan of 10 to 15 years. This may be short to some people but this is actually quite a long time for crossbreeds. Just as long as they do not develop genetic illnesses, you are assured that you can live with them for a long time.

In order to make sure that your Moyen Goldendoodle lives out his life, you have to be mindful of certain problems that come with the breed such as:

The Moyen Goldendoodle is definitely not a watchdog nor a guard dog. They are too friendly for that, even if you train them to do so. So if you are considering getting one for this purpose, we are sorry to say, but this dog is not for you.

On the other hand, if what you are after is companionship, then the Moyen Goldendoodle would be perfect. If you are planning to have kids anytime soon, there will absolutely be no problem as they thrive in a family setting.

If you live in an apartment or condo, it is not advisable to get this dog, unless you can take him out every now and then. For those who are planning to house this dog outside, this is impossible as this breed is an indoor dog.

The best place for a Moyen Goldendoodle is a house with a gated yard. In this way, you do not have to make it a point to walk him. Instead, he can just go out to the yard to spend excess energy.

Lastly, if your household tends to be very busy to the point that there is no longer time to socialize with him, it may not be a good idea to get one. They love attention, so if they do not get that for a long period of time, they may develop anxiety. The same goes for people who leave their houses for a long time.

A solution to this is to spend quality time with him when you get home. That should be enough to hold him off up until the next time that you have to leave for work.

The Moyen (medium) Goldendoodle is the golden standard in terms of getting a Goldendoodle. What you will get is such a cheerful and loyal dog that will love its owners no matter what. If you are a bit of an active and sociable person, then you might have found your “dogmate” in life with the Moyen Goldendoodle.